The Early Days of FOSCL: Recollections of Edward Album

The following article was written by Edward Album in October 2011 and first published in the November 2011 issue of the FoSCL Journal.

I read with great interest the reflections on the early days of FOSCL which were published in the August Magazine. As I was closely involved, particularly on the campaign to save the Line from closure, I thought I should add my own recollections. I joined the FOSCL Committee in early 1986 and served until my retirement 23 years later in 2009.

It may be easiest to start with the story of how, as a Londoner, I became involved. It so happened that a master at my son’s school who came from North Yorkshire was raising money for the campaign to save the Line and was looking for people in London to add support. I had been brought up in Bradford during the Second World War between the ages of 3 and 9 and my favourite occupation then was watching the trains go by at Shipley or in the fields near the station at Crossflatts. My father, who served in France in the First World War, was too old to go abroad in the Second and was posted to the North of England. We had one year in Blackpool and then five years in Frizinghall. With this background, and in view of my experience as a company and commercial lawyer, I volunteered my services.

I believe I first made contact with Brian Sutcliffe or Pete Shaw. The battle to save the Line was in full swing and the Friends needed legal representation at hearings of the Transport Users Consultative Committees (TUCC’s) for North East and North West England. There were numerous individual speakers at the TUCC hearings, which took place in different towns and cities, and they concentrated on the value and importance of the Line and resulting hardship. The legal emphasis was on extracting from British Rail the actual figures for income and expenditure, including the real cost of repairing the Ribblehead Viaduct. British Rail were not helpful on this subject and took over a year to respond, but had let it be known that repair estimates were in the region of £10 million or even larger. (The actual figure when the Line was saved and the work had to be done was around £2.5 million.)

I became heavily involved also in lobbying Members of Parliament in London and developing communications with the Department of Transport. A senior chartered accountant was brought in to present realistic figures and a number of leading politicians, including Lord Whitelaw, were recruited to support the campaign. The campaign was conducted both by the Friends and by several other groups, including a Joint Action Committee, of which the Friends were part. 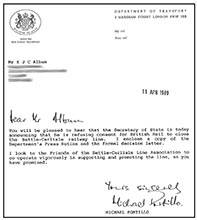 The Friends Committee was a strong one, all were active in different roles. After numerous vicissitudes and a double round of campaigning via the TUCC’s and the Department of Transport the Line was reprieved on 11th April 1989. I still have the original of the letter written to me by Michael Portillo, then Minister for Public Transport reporting the reprieve and saying that he looked to the Friends for support in the future [see right: click on the thumbnail to see a larger version]. We can categorically confirm that this support has been given in full measure.

After the Line was saved, the Committee somehow thought that our main job was done. This proved incorrect. There were numerous other activities for the Friends, including lobbying for improved services, sales of memorabilia, a station shop and sponsored walks. Then came the challenge of privatisation which involved a number of detailed memoranda from the Friends and our appearance at the famous Committee Room at the House of Commons. We opposed the proposals not for political reasons but on the grounds of cost and practicality. I still have the Memoranda which I drafted at the time, with approval and additions from the Committee members, and these were distributed to MP’s and the Department of Transport.

Subsequently, potential risks for the Line have remained partly in view of financial constraints and partly from other pressures. The work of the Committee has continued unabated. An important element of the Friends’ closure campaign was an offer to set up a Trust to raise funds for the Ribblehead Viaduct repairs and future works. This offer was accepted by the Minister and mentioned in his reprieve statement. He said:

“It has been proposed that a trust fund be set up to care for the structures on the line of heritage importance. I support that proposal.”

Substantial sums were then raised for the Ribblehead repairs and later for the acquisition and restoration of the three stations later acquired by the Trust at Ribblehead, Horton and Kirkby Stephen and also, much later, for the Stationmaster’s House at Ribblehead.

It has been a long journey so far as the Committee are concerned (and for me whilst a member) but a very positive one. The particular feature of the Friends, based on the wise initial leadership of Brian Sutcliffe and of later Chairmen, has been the co-operative policy of the Friends towards Government and the Rail Authorities. The Friends have fought for what they believe in or wanted to achieve but always endeavoured to work with those running the Line. It has been a privilege to be part of this.

I understand that the Friends’ Archivist is putting together documents from the early days. I shall be happy to contribute my papers, which have filled several boxes.