Thanks to Michael Summers for this contribution and for the photo.

This diary runs from Tuesday 1st January to Tuesday 30thApril, the period covering the first seventeen weeks of 2019. Appleby has a keen interest in the operation of Charter trains as the majority of them stop here allowing  many people from all over the UK the opportunity to meet those who work on the Settle Carlisle Railway in both paid and volunteer roles.  The prospect for Charter trains looked very encouraging for 2019 following a successful previous year when no less than 74 ran. The first Charter of 2019 arrived on 26th January hauled by `Leander’. There then followed some early season cancellations due to the unavailability of the preferred steam locomotives, (Union of South Africa and Tornado) and in one case a Charter being rerouted due to flooding on 16th March.  During February four Charter trains ran, two of these were hauled by 45596 `Bahamas’ which was making its first runs in almost 25 years after a reported £996,000 overhaul. Another highlight in February was the unusual pairing of `British India Line’ with B1 61306 `Mayflower’.  During March five Charter trains ran, two of which were diesel hauled.  April saw four Charter trains, one of which on the 13thwas double headed by a pair of Black 5 locomotives, these stopped for almost an hour at Appleby.  On the same day that the Black 5s ran `Tornado’ followed them, making its first visit to the route since 24thFebruary 2018 when on that occasion it was piloted by a diesel. On Saturday 27th April `Union of South Africa’ ran non-stop to Carlisle. Finally on Tuesday 30th April the first `Dalesman’ of the season ran and was hauled by another recently overhauled locomotive, 6201 `Princess Elizabeth’ which was making its first visit to Appleby since November 2012. Due to a points failure at Hellifield the train arrived late at Appleby and in need of water. Permission was granted for the loco to be detached and to cross to the up line to reach the water column. Unfortunately during this move yet another points failure occurred delaying the train further, it eventually departed 64 minutes late and caused the following Leeds to Carlisle service to be 119 minutes late. Despite the early season cancellations the actual number of Charter trains that have run is precisely the same as the corresponding period last year; the total being 14, clearly the market remains buoyant for journeys over this wonderful railway, and it should be noted that delays such as 30th April are rare.

Early in March the appearance of Appleby station began to change. Initially contractors for Northern Rail arrived to carry out ground work in preparation for the ticket machine, customer information screens and associated equipment. Following the completion of the groundwork the ticket machine arrived and went live on Tuesday 9thApril, however due to its south westerly facing position problems are being experienced on sunny days when it has proved all but impossible to purchase a ticket. The customer information screens are yet to be installed but all of the preparation work is complete.  The week commencing 11th March saw the contractors arrive to start work on the FoSCL sponsored passenger waiting shelter; excellent progress has been made and by the end of April the roof is complete and work is now progressing on the windows and interior.

Freight traffic is obviously subject to market demands and at this end of the route there has been a further decline in tonnage.  Until recently a typical month would see around 89 freight diagrams but using February and March as examples the number was down to around 70 each month. The first coal train of the year ran on Saturday 16th February; this working from Killoch Colliery to Drax power station is the last cross boarder coal working and only runs this way once a week.  The very photogenic log train which would normally run five days each week all but disappeared during March and April, however at the time of writing it is beginning to run a little more frequently. The haulier of the log trains `Colas Rail’ took over the contract for the loaded stone trains from Mountsorrel to Carlisle on 1st April from Direct Rail Services, these trains can run up to four times each week. British Gypsum at Kirkby Thore has taken a couple of extra loads of containerised power station Gypsum from Drax in addition to their basic requirement of four trains each week from Teesside. The China Clay train which originates in Belgium and runs to Irvine in Scotland began using this route in April 2018, since then a total of 28 trains have run this way and it continues to run usually at fortnightly intervals. Despite being the second largest Rail Freight Company, Freightliner has no booked workings over this route, they do however move light engines to their depot in Leeds. 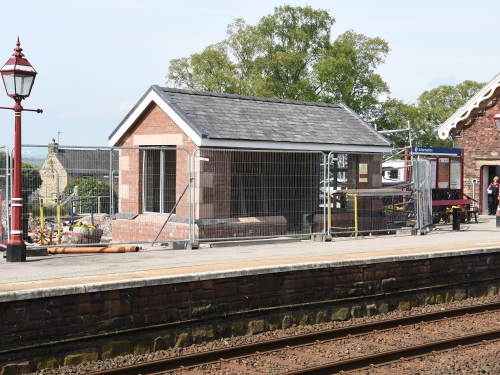