Appleby is half-way between Settle and Carlisle.  We think it deserves more prominence so here is a diary of events in 2018.  Thank you Mike Summers for this contribution.

Northern Rail. The customer perception of Northern Rail at Appleby may differ from that at the south end of the line due to the fact that trains can, and occasionally do get turned back here, an example of which occurred on Wednesday 10th October. The previous evening a northbound freight train had broken down north of Appleby and was still there the following morning. Initially single line working to and from Carlisle operated but by mid morning a line closure north of Appleby was imposed forcing  Northern services to use the sidings. Passengers had to leave the trains and continue their journey on the rail replacement buses; the problem was no buses had been arranged. To the annoyance of fare paying passengers, taxis began arriving to pick up train crews to allow them to continue their journey. The next train arrived and the platform filled with yet more passengers, fortunately one of these was a musician and she entertained the crowds with her accordion. It’s a pity the train crew couldn’t have enjoyed the whole performance but their taxi turned up, unlike the buses. Fortunately the excellent performance of the station staff pacified the waiting passengers until the buses eventually turned up a couple of hours later. It’s a sad indictment that some customers at Appleby feel that the service was better when the line was closed due to the landslip, the trains terminated on time and the buses were waiting.

Freight. Tonnage passing through Appleby held up well during the first half of 2018 mainly due to additional coal traffic, unfortunately this traffic tailed off during the summer and has not recovered since. Coal from Scottish open cast sites is still moved to Drax power station but the Tyne Valley is currently the favoured route. An example of why this is so occurred in the early hours of Saturday 20th October when a loaded coal train took almost the whole night to get over Ais Gil due to poor adhesion. There was no further coal traffic until 22nd December, this time successfully. Although only minimal, all other core freight traffic continues to run. The longest distance traffic from Antwerp to Irvine in Scotland continues to share this route with the West Coast Main Line; since the first train ran on 27th April there have been 17 such workings pass through Appleby.

Charter Trains. Appleby is famous for its annual horse fair attracting many thousands of tourists, however there is another place where thousands of tourists arrive each year, Appleby station. Although 2018 was not the best year on record for Charter trains, that was 2015 with a total of 82, last year was the second best with a total of 74. Of these, 54 were steam hauled and 20 were diesel hauled. Additionally two steam locomotives which were not advertised passed Appleby for positioning moves. Due to its advantageous facilities and long platforms Appleby is the only place where these trains are booked to stop between Carlisle and Hellifield. All steam workings normally stop here, and of the 20 diesel hauled trains, 12 stopped. The dwell time varies between 20 minutes to over three hours when they use the sidings. The total number of carriages which paused at Appleby during 2018, not including support coaches amounts to 673. A conservative estimate of the number of people stepping on to the platforms at Appleby from these trains is 35500, add to this the many tourists who come along to watch the steam workings and the number is probably near to 38000 people.  Appleby station is the only point of physical contact that these people will have with the Settle to Carlisle Railway during their journey and it is important that they are not disappointed. Unfortunately the fabric of the station is now looking tired and in need of refreshing. During the summer the volunteer gardeners worked wonders to create vibrant colours which many people photographed. We should remember however that these trains arrived every month last year, even in the autumn and winter. The stop at Appleby station should enhance their day and not disappoint, it’s in our interest that they recommend us.

There are very rare occasions when the arrival of a steam locomotive can bring out the worst in people and such was the case on Saturday 17th February, perhaps the worst day of the year. The day started well, a pair of vintage diesels ran northbound non-stop from Gloucester to Carlisle and attracted a small crowd. In the opposite direction a London bound steam Charter arrived hauled by 45699`Galatea’. As the train stopped for water many of the passengers disembarked and crossed the bridge hoping to obtain their photographs. A large crowd gathered at the platform end but one photographer who was not a passenger took exception to being given safety advice from the station supervisor and physically attacked him. Police were quickly on the scene and the man was arrested and removed from the station. When he appeared in court some weeks later he was fined £100, he also had to pay £85 costs and £100 compensation.

Another problem with steam locomotives apart from attracting angry photographers is that they need water. Early in March news began to emerge of a dispute regarding the use of Appleby water tower which hitherto all steam locomotives had used when working south. The dispute materialised and the last locomotive to take water was `Galatea’ on that fateful Saturday 17th February and it wasn’t until August 11th when `Union of South Africa’ next used the facility. Although the dispute is reportedly resolved only one other locomotive took water from the tower during the remainder of the year, this was Wednesday 10th October. On this occasion 8F 48151 was severely delayed with a train bound for Bedford, the loco was watered in the dark and eventually disappeared into the night, very atmospheric.

Highlight of the summer was Saturday August 11th when to mark the 50th anniversary of the last British Rail worked steam train, three steam hauled trains arrived creating a gala atmosphere. By coincidence the 50th Charter train of the year was `Galatea’ hauling the `Cumbrian Mountain Express’. So many people were on the platforms that day that British Transport Police were in attendance for crowd safety.

On the evening of Saturday 8th September the `Belmond Royal Scotsman’ visited Appleby, staying overnight in the sidings including its passengers. This train is perhaps the most luxurious on the UK rail network, two locomotives, ten `State Cars’ carrying just 17 guests with 14 stewards. The guests all of whom were American left Appleby by luxury coach on Sunday morning. The train later moved on to Penrith where passengers rejoined following a cruise on the Lakes, from there they continued their journey into Scotland.

The final Charter train of 2018 arrived on Saturday 22nd December; the locomotive was `Flying Scotsman’ which was met by a very large crowd including Father Christmas and his helpers. The train was made up of 12 carriages and remained at Appleby for around an hour creating a wonderful festive atmosphere.

We have been very fortunate during 2018 to see eight different types of steam locomotives, all of which stopped at Appleby. The most frequent visitors were `Galatea’ and the 8F both with 16 trips each.

The year 2019 looks promising with numerous steam Charters already booked for the first quarter, the first one is due on Saturday 26th January.  There truly is a lot more to Appleby than just the famous horse fair. 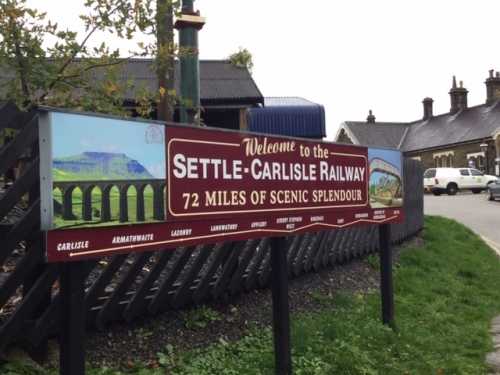