The rally features over 250 vintage buses, lorries and commercial vehicles on show in Kirkby Stephen and Brough during the day, along with food & drink stalls, a children’s roundabout and a Fun Bus. There will also be free vintage bus rides between the towns.

Held at some of the most picturesque locations in the Upper Eden Valley and in the Cumbrian North Pennines’ area of outstanding beauty and the recently extended Yorkshire Dales National Park (Westmorland Dales), the two-day event attracts thousands of people to South East Cumbria to view the impressive display of much loved vintage vehicles that, alongside a picturesque road run across the fells, frames a host of other activities and stalls for shopping and food and drink.

The event features painstakingly restored vintage lorries, buses, coaches, Land Rovers, military and utility vehicles, tractors and other farming vehicles, vans, wagons, steam engines and historic pedal bikes, that evoke the nostalgia of their era together with many a childhood memory.

The fabulous classic vehicles taking part in this year’s Rally date back as far as 1919 and all have great stories to tell.  They include several wagons from the famous William Hunter Collection, the 1984 minibus used in the film, Pride, about the Welsh miners' strike, buses used across the UK and the Isle of Man and old tractors that have been part of our farming history.

In between viewing the amazing historic vehicles, the stalls welcoming shoppers include those selling autojumble, vehicle parts and tools, outdoor clothing and shoes, diecast models, local preserves, fudge, flapjacks and cakes as well as exhibition and promotional stalls including The Anniversary Exhibition of Ribble Valley Preservation Trust, The Teesside 500 Group, the Barrow Transport Museum Trust, a new Scammel Display.  New this year is Pro Canvas Studio – your images of the beautiful vehicles turned into canvas for you to take home. For that breakfast lunch and tea break enjoy BBQ burgers, steaks and sausages as well as the popular Indian street food stall.

A highlight of the 21st Cumbria Easter Rally will be the amazing annual road run through the fells, which takes place on Saturday 20th April. The evening procession of classic trucks and buses will delight the crowds lining the route with the fells of the Westmorland Dales creating a spectacularly beautiful backdrop for sightseers, professional photographers and Instagrammers alike.

Entry is free for exhibiting historic, commercial vehicles and the free, family-friendly event features a mini-roundabout and other activities for children, plus local artisan, craft and food stalls and extended parking to manage visitor numbers comfortably. The Easter Rally provides two days of nostalgia as well as a fascinating visual history of commercial vehicles.

Encounter Eden, a not-for-profit, social enterprise designed to give the area an economic boost with a series of events in the region took over the co-ordination of the classic commercial vehicle rally last year. The Rally was previously organised by the Eden Classic Vehicle Group and the now-retired Hamer Family (returning as exhibitors with Cumbria Classic Coaches).

Entry to the public is Free.

Nanette Rigg of Encounter Eden: ‘Encounter Eden took on the task of organising and promoting Cumbria Easter Rally in 2018, to help maintain what has become the first main visitor attraction of the Cumbrian tourism calendar. The event has also proved its importance to the local community as a flagship event, with local observers reckoning that up to 10,000 attended the event in 2018, bringing an extremely welcome estimated £100,000 into the local economy. Encounter Eden is looking forward to helping bring together exhibitors, visitors and locals together again for the 21st Cumbria Easter Rally and build upon the much-loved tradition in 2019.’

SCHEDULE FOR THE WEEKEND:

Road Run on Saturday 20th April at 16:30 starting at Grand Prix in Brough. If you want to take a bus to join the route please be at the Grand Prix at 16:10. 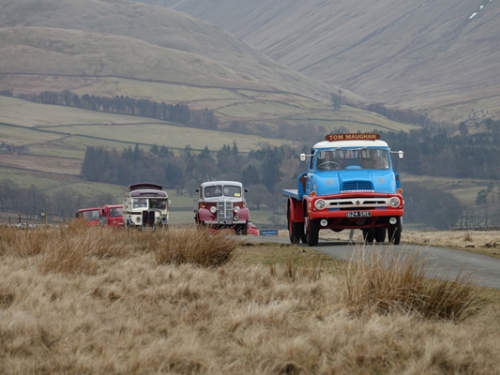