End of the Line concert

Visitors to the Dales may have wondered at the plaques dedicated to the memory of railway navvies in the parish churches of Holy Ascension in Settle and St Leonards in Chapel-le-Dale.  They mark the men that died in accidents during the building of the railway between Settle and Dent in 1869 and 1876.  These deaths raise intriguing questions about the men who made the ultimate sacrifice during the building of the railway.  The number of deaths is an appalling statistic, and every one of them was someone’s son and possibly a husband and father.  Their descendants and relations should know who they were and the contribution they made to this iconic railway and to life in Settle.

This event is a celebration of the stories of Settle’s railway navvies, their lives and their lasting achievement - The Settle to Carlisle Railway.

This will be a unique live event.  It will not be recorded.

Sarah worked as a secondary head teacher for many years but since retiring has found, in her words, ‘an even more rewarding occupation'.  She has been researching the lives of those buried in the graveyard at Settle Parish Church, and with the help of a team of people and the church, this has become the ‘Settle Graveyard Project’ >> https://www.facebook.com/Settle-Graveyard-Project-105724261002415.  Her discoveries led to her first book 'Curious Takes from the Ancient Graveyard’ and a ever-growing library of potted family histories in the Dales Community Archive >> https://www.dalescommunityarchives.org.uk.

Sarah has railways in her genes.  Her parents founded the Middleton (Heritage) Railway in Leeds.  Her father, Dr Fred Youell bought the last steam engine build at the Stratford works from British Rail, and she remembers childhood holidays spent along the Settle to Carlisle Railway.

Mark started singing folk songs at school where he and his friends would perform at concerts for PTA nights and at local folk clubs.  When he moved to Manchester he went to the Lancashire folk singer and researcher, Harry Boardman's folk club where he was asked to be a resident singer.  His career on the railway required to move all round the country, so he sought-out folk clubs wherever he went.  When, at last, he returned to Lancashire, he took over his local folk club which has been running successfully since 2002.

Over the years Mark has been performing on a semi-professional basis as a guest at Folk Clubs and Festivals mainly in the North West area.  He has also performed further afield where he could fit it in with his main employment as an engineer in the railway industry electrifying the lines of Great Britain and in other parts of the world.

Two internet based programmes that Mark was involved with were "Harry Boardman - The Man and his Music" - a tribute to the Lancashire singer and researcher who inspired many Lancashire people to look at songs in their own county, and "The Lost Days of Steam" which looked at the passing of the steam age on the railway 40 years after steam stopped running commercially in 1968.

Mark has produced a number of CDs of him singing or as a vocalist and instrumentalist on other people's recordings.  More about Mark and his music here >> http://www.markdowding.co.uk

Sarah Lister’s book, 'The Navvies of Settle: The End of the Line' is for sale in Settle at

The inspiration for the book were the graves of navvies in the churchyard of Settle Parish Church.  There are still more graves to be researched, and doubtless many more stories to be re-told about the extraordinary people that are resting there.

If you have enjoyed the performance and wish to help support the maintenance of the churchyard, please make a donation online here >>  https://givealittle.co/campaigns/1951ab28-bff0-4aea-8ddf-811ad45975b8 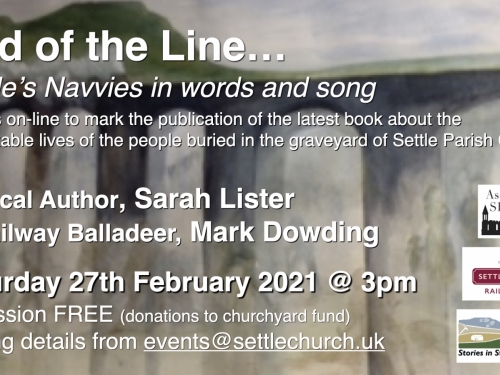