The railway from Settle to Carlisle is one of the world’s greatest railway journeys. The seventy two mile line passes through the Yorkshire Dales and Cumbria’s Eden Valley before arriving at the border city of Carlisle. Now, for the first time, you can travel over the line from the air stopping wherever you wish to view the line in high definition. This has been made possible by the launch of a new website: www.exploremoresettlecarlisle.co.uk

‘ExploreMore’ uses images taken by Network Rail. The images are overlaid on both a map and the original plans of the Midland Railway Company dating back to the 1870s. Features such as stations and archeological sites are highlighted. Clicking on one opens up image galleries and information about the line and the people who lived and worked on it. Some features – such as the famous Ribblehead Viaduct – can be viewed in 3D.

Over one hundred features are highlighted and over two hundred images. New images and information is being added continuously to create a valuable source of information for anyone interested in the railway, the countryside through which it passed, the history of the line and family historians.

‘ExploreMore’ is available on-line but in addition there are large touch screens at the Ribblehead Visitor Centre and the Museum of North Craven Life at The Folly in Settle.

‘Explore More’ was developed by Atlantic Geomatics working with the Settle and Carlisle Railway Trust and the Friends of the Settle Carlisle Line (FoSCL). It was initially developed as part of the ‘Stories in Stone’ project funded by the Yorkshire Dales Millennium Trust. Funding to extend the scope of the project to include the whole line was provided by FoSCL

The technology behind Explore More

‘Explore More Settle Carlisle’ is a web based mapping platform made up of layers of imagery and maps. The aerial photography supplied by Network Rail provides a high resolution orthomosaic image layer which is georeferenced and positioned accurately on top of an Ordnance Survey basemap. A detailed map layer was created and provides an alternative view of the line showing the topology of the terrain and infrastructure, with structures of interest labeled. The original railway plans were georeferenced and individually oriented to fit the aerial imagery and map.

In addition to the mapping, aerial surveys were conducted at several locations using an Unmanned Aerial Vehicle (UAV). The UAV captured imagery from various positions above and around the feature of interest, and using a process called photogrammetry, 3D models were produced. These models are positioned on a 3D globe enabling the user to visualise the model and appreciate the landscape within which it lies.

The Settle and Carlisle Railway Trust (SCRT) and Friends of the Settle Carlisle Line (FoSCL).

The SCRT is a charitable trust, which helps to conserve the buildings and structures on the line and to interpret its rich history. It has leases on three stations: there is a Visitor Centre at Ribblehead station and holiday properties at Kirkby Stephen and Ribblehead. SCRT manages an Archive Centre at The Folly in Settle.

FoSCL is a voluntary organization with over 3000 members who support the line in many ways including providing new facilities for passengers, caring for stations, organizing walks, and operating shops at Settle and Appleby stations.

Atlantic Geomatics was established in 2002 and has grown to become a successful survey, mapping and GIS solutions provider. Based in Penrith, Cumbria they provide a specialised range of survey and map related services throughout the UK and overseas.

Services include: GIS development and spatial data management; survey and mapping for the built and natural environment; laser scanning services for 3D modeling of structures and monitoring. They also provide web based mapping technologies to enable clients to record and manage their assets using simple online tools. In particular they provide specific services for burial grounds, railways and schools. 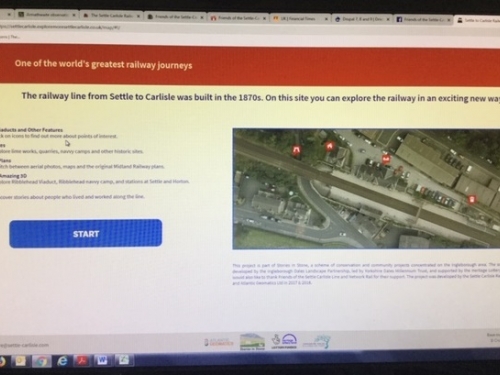