A CD of original songs written to celebrate the lives of the men and women who built the Settle-Carlisle Railway in the 1870s has been released by well-known folk singer, Karin Grandal-Park.

Lives on the Line is part of Stories in Stone, a scheme of conservation and community projects concentrated on the Ingleborough area. The scheme was developed by the Ingleborough Dales Landscape Partnership, led by Yorkshire Dales Millennium Trust (YDMT), and supported by the National Lottery Heritage Fund.

Karin said:
“Up until recently I’d lived for more than 20 years within a couple of miles of the Settle Carlisle Railway and during that time I travelled its length many times, never giving a thought to who built it or the complexities of building a railway line across such difficult terrain. I was more concerned with just getting from A to B. When Mike Harding suggested a song for me to sing called Alice White, I became fascinated with the lives of the navvies who built the line - their many hardships, their dependents, and the conditions in which they lived.”

Karin started classical voice training as a nine-year-old, when one of her school teachers suggested to her mum that she had a talent for singing. As a teenager she wanted to sing contemporary/popular songs and, with a special licence from the Education Board as it was then, she started singing solo in clubs throughout Lancashire. From the age of 17 she sang lead vocals in various bands, performing across the UK and Europe, as well as working in studios as a session singer. Around five years ago she fell in love with the stories, history and traditions associated with folk music. She has since performed at folk clubs and festivals across the UK, including a regular spot at the folk sessions at The Lion in Settle, as well as festivals in Spain, Portugal and Majorca.

Karin added:
“I spent many hours researching the Settle Carlisle Railway and also what was happening in the 1870s: the politics, fashion, the working classes, the music they liked. This provided me with a wealth of knowledge and inspiration to write the six songs. In fact, there was such an abundance of information and stories that I decided to focus the collection of songs around the Ribblehead Viaduct, Blea Moor Tunnel and the Batty Green ‘shanty town’.”

Don Gamble, YDMT’s Scheme Manager, said:
“We’re delighted to support this superb collection of songs specially written to remember the lives of the hardy folk who lived, loved, worked and died at Ribblehead, building the extraordinary engineering feat that is the Settle Carlisle Railway. I’m sure that in time the songs will become part of the area’s folklore tradition, and I look forward to hearing them played live in the near future.”

Stories in Stone is enabling people from all backgrounds and of all ages to learn about, enjoy and help manage the stunning limestone landscape around Ingleborough, both above and below ground. The programme is delivering a huge number of projects including restoring field barns and wildlife habitats, involving people in archaeological digs, digitising archives, providing a range of training opportunities, offering new learning opportunities for local school children, improving physical and intellectual access, and delivering events and activities.

The CD costs £5 (plus £2.50 p&p) and part of the proceeds will be donated to the Friends of the Settle-Carlisle Line. It is available from Karin’s website www.karingrandalpark.co.uk . 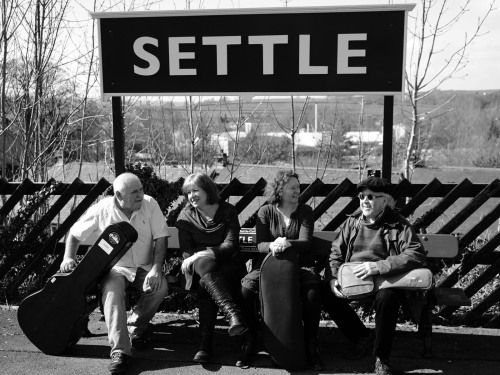