The Railway Room at The Museum in The Folly, Settle

The Railway Room, telling the story of the famous Settle to Carlisle line, has re-opened after the installation of a completely new exhibition. The railway from Settle to Carlisle is one of the world’s greatest railway journeys. It is seventy-two miles long, built by the Midland Railway Company, and opened in 1876.

This new exhibition tells the story of the line’s construction, the people who worked on the railway, its golden age, and the threat of closure in the 1980’s. A stunning image of the famous Ribblehead Viaduct fills one wall, a porter’s desk from Horton-in-Ribblesdale contains a rent book from the 1880s and other objects.

A touch screen gives access to ‘Explore More’, which allows visitors to travel over the line from Settle to Carlisle using high definition images overlaid on both a map and the original plans of the Midland Railway dating back to the 1870’s. Features such as stations and archeological sites can be explored in detail.

“Explore More’ can be accessed from the Railway Room and also at the Ribblehead Visitor Centre. It is also available on-line at www.exploremoresettlecarlisle.co.uk

The archives of the Settle Carlisle line are housed at The Folly and are usually open on the first Saturday of the month, or other times by arrangement. 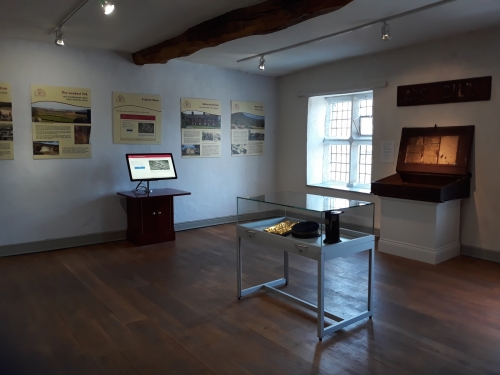