at the Royal Oak, Settle, Friday 29 November at 8 pm.
Featuring Karin Grandal-Park and her new production of "Lives on the Line", songs about the men and women who built the Settle-Carlisle Line. Narration by Mark Rand.

Karin is a singer/songwriter with some 30 years experience in the Jazz/Blues field. She has sung with numerous bands over the years including After Hours, Riva and Heartland. She also has worked as a session singer with various studio’s. Several years ago after going to a Folk Festival in Dumfries & Galloway, she became enthralled with Folk Music and its diversity. Karin started to experiment with writing Folk Songs and went to many Folk Sessions up and down the country including the wonderful session run by Mike Harding at The Lion in Settle.

Karin now devotes her time solely to writing and performing within the Folk genre. She has performed at several of the fantastic Costa Del Folk Festivals in Spain, Portugal and Mallorca, as well as a number of Folk Festivals and Folk clubs in the UK.

She has recently been successful in being offered funding through Stories in Stone, a scheme of conservation and community projects concentrated on the Ingleborough area. The scheme was developed by the Ingleborough Dales Landscape Partnership, led by Yorkshire Dales Millennium Trust, and supported by the National Lottery Heritage Fund. This funding to write and produce a CD of songs about the lives of the men and women who built the Settle Carlisle Railway Line. 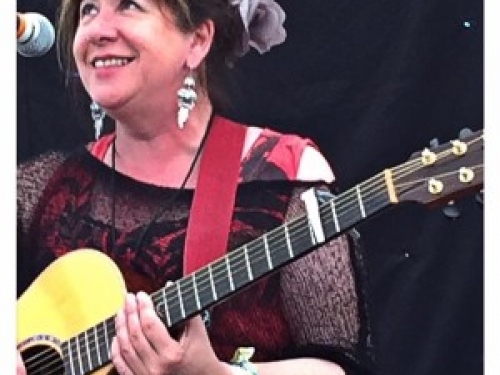