Now and again the Settle-Carlisle trains are overcrowded.  Not unusual on the Northern Rail network and there are various reasons quoted, primarily shortage of rolling stock.  This is partly due to completion of the electrification of the Manchester-Bolton-Preston line being delayed for around two years, with a corresponding delay in the availability of the diesel units which were expected to be freed up by this.

The problem is that a high proportion of our trains are 'short-formed', that means they have fewer carriages than we were promised.  This is a particular problem for our colleagues in the Settle-Carlisle Railway Development Company who take group bookings.  They could take more if we could be confident of getting 3- and 4-car trains but all too often we are faced with only 2 cars with overcrowding as a result.

It wouldn't matter so much if there were more northbound trains in the morning.  FoSCL, working with the SCRDC, will be continuing its efforts to get more carriages and more trains. 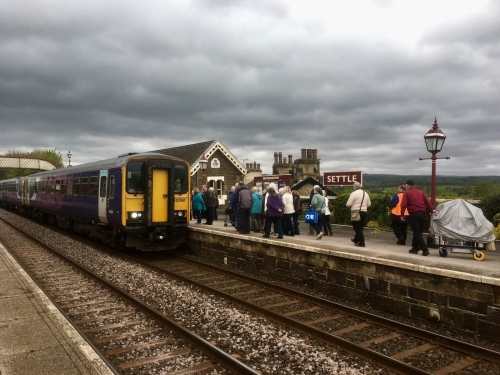