The RMT Strikes – a Personal View

The RMT have announced further strikes on every Saturday until the end of 2018. There will be reduced services throughout the North including the #Leeds #SettleCarlisle line.

Our readers will know that the Northern Rail network has been bedevilled by a regular series of strikes by the conductors (or guards, the title that many of them prefer) some 18 months up until now.  There is no sign of a resolution to the problem.  As ever, it takes two to tango, and as a concerned FoSCL member and former Chairman I’ve been trying to understand what lies behind it all.  My information comes from RAIL magazine and from informal contact with Northern Rail and the RMT union (whenever I  just happen to bump into anyone from either organisation!).

The issue is the planned introduction of Driver Only Operation trains.  There are two aspects to this:

There are some fundamental issues at stake here.  The Train Operating Company (Northern Rail) would love to reduce its costs, not so much in order to increase its profits as to reduce the amount of subsidy it receives from government, which has been specified by the DfT to reduce progressively over the course of the franchise.  The RMT sees this as an attempt to do away with conductors entirely, thus striking a blow  at its very existence.

So far no problem as far as the S&C is concerned.  We shall continue to see refurbished old 158 and 153 Diesel Multiple Units on our line, so nothing will change.  Or will it?  Read on…

My informants in the RMT say that Northern Rail now want to increase the proportion of DOO trains across the whole network to close on 100%, a far cry from the 50% plus in the franchise ITT.  This will affect the S&C, we shall lose our conductors.  Small wonder that the talks between the two sides are currently going nowhere if the TOC has moved the goalposts in this way.

Ah, you may say, but Northern will still have a second person on every train, though they may not have the title Conductor and won’t operate the doors.  But will they necessarily?  At present it is a legal requirement to have a conductor on every train and the train can’t depart without one.  But under the new arrangements if the second member of staff fails to turn up the train can still depart with only a driver on board.  Well, you may also say, not a problem on the S&C, we’re a well-behaved bunch and people are very helpful.  But here’s an anecdote from one of our conductors’ personal experience:

The last train north from Leeds on a day in the middle of winter stops at Dent.  A passenger  whom  the conductor had already identified as being somewhat confused gets off the train.  It’s cold and it’s dark.  The conductor asks him how he’s going to proceed from there (bear in mind that Dent station is 4.5 miles from the village, the station is 1050 feet above sea level and there’s nothing there).  Passenger has no clear idea, so after some five minutes the  conductor persuades him to get back on the train and sees him safely to Carlisle.  Would a non-conductor, who is not responsible for the train, have gone to this trouble?   Would the driver have had any knowledge of the situation?

The way forward will have to be compromise, as ever.  According to Paul Stephens’ article in RAIL Issue 861, Merseyrail have signed a provisional deal with the RMT.  Under the initial proposals, 220 guards were to have been withdrawn by Merseyrail and replaced by a contingent of 60 non-safety-critical on-train customer staff on busy and late night services only.  The TOC is now expected to extend this arrangement to all services, though DOO will still apply.  However, talks supervised by ACAS will need to continue for a few more months, to agree fully the role and safety responsibilities of the second member of staff.  The RMT has agreed that no further industrial action will take place until a final deal is reached.

A final question:  should FoSCL take sides in the dispute?  There are those who would have us support the RMT’s position.  In my view this would be a very short-sighted action and would ruin the very good working relationship that we have with Northern.  When I was FoSCL Chairman, the S&C had its own bitter industrial dispute involving the refreshment trolley staff, most of whom joined the RMT.  Feelings ran high on the FoSCL Committee and a large minority wanted us to side with the union.  Rightly or wrongly I resisted this and we eventually issued a neutral statement regretting the dispute and hoping that it would be resolved soon.  In effect we have already taken a similar position this time, the correct approach for a Rail User Group that represents its members and the passengers on our line.  But if Driver Only Operation is proposed for the S&C, what then?  It would be interesting to have our members’ views on this. 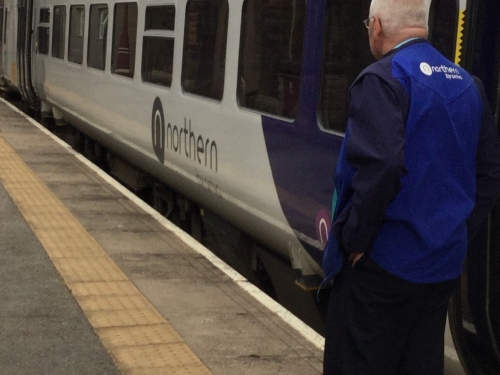