The RMT has announced that Northern Rail conductors will strike on every Saturday in January.  This is likely to mean no Saturday trains at all on the Settle-Carlisle Line and very few replacement buses.

According to the Northern Rail web site, https://www.northernrailway.co.uk/strike , Northern has called on RMT to suspend its damaging strike action and accept an independent ACAS inquiry.

David Brown, Managing Director at Northern, said: “More than 50% of all rail journeys in the UK are made on driver-controlled trains and recently the Department for Transport and Transport for the North publicly confirmed that a second person – in addition to the driver – would be retained on Northern services.

“This second person will provide customer service, including meeting customer needs on accessibility, safety, security, ticketing and information. Therefore, there is no reason for the RMT to continue its disruptive and economically damaging strikes but despite this, the RMT continues with its strike action.”

"Throughout 2018 RMT members have fought for the principles of a publicly-owned, safe and accessible transport network for all. In 2019 we will be stepping up that campaign as the Tory Government teeters on the brink and the prospect of sweeping away years of private greed and austerity ‎grows by the day.

"I want to pay particular tribute to RMT  members on Northern and South Western Railway who will be striking again this weekend ‎and on New Year's Eve in a long-running battle to put public safety before private profit. They are a credit to the entire trade union movement."

It is not for a rail user group like FoSCL to take sides in this dispute, we just hope that the differences between Northern and the RMT can be resolved as soon as possible.  But regrettably it does look as though both sides are entrenched in their positions and that the strikes are set to continue for some time yet. 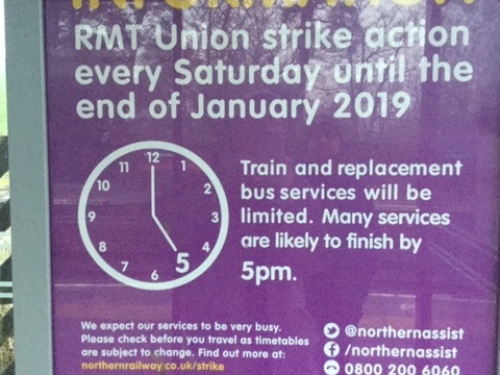