1. The new waiting shelter at Appleby station features a
stunning hand-painted mural showing the railway
history of the area. The idea for the mural was
developed by volunteer members of The Friends of the
Settle - Carlisle Line (FoSCL) and Northern staff,
supported and funded by FoSCL, the Settle & Carlisle
Railway Development Company and Northern.
The idea was to portray the history of the two railway
routes, serving the market towns between Kirkby
Stephen and Appleby, namely the current Settle – Carlisle
route and the former Stainmore route.

The mural was hand-painted in the waiting room by
Jenny Triblion, an artist who currently lives in
Frizinghall, near Bradford.

Between 1870 and 1875, on the bleak
Ingleton Fells at over 1,000 feet, the very heavy works of
Batty Moss Viaduct and Blea Moor Tunnel needed
proportionately more workers than similar constructions
elsewhere. It was here that several encampments, one
of which was Jericho, were established for up to 3,000
men and their families. The camps had many facilities
including shops, post office, reading room, mission hall,
school, pubs and hospital.

An encouraging aspect is that a majority arrive by train,
being over 400 participants in the 2019 season. The tour
involves a train journey over the Viaduct to Garsdale, at
one time called Hawes Junction.  Our tours attract visitors from all over Britain and
overseas. We also arrange private tours for groups such
as the University of the Third Age (U3A), Women’s
Institute, archaeology and walking groups.
So if you have missed one of these tours,
watch out for the 2020 programme. 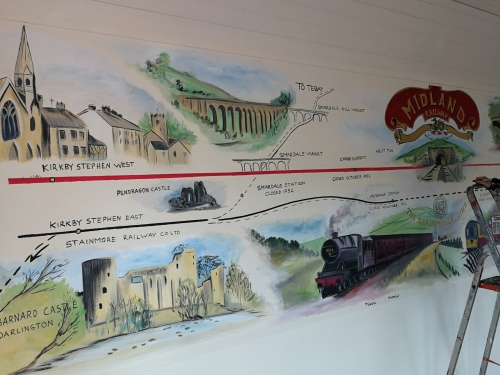